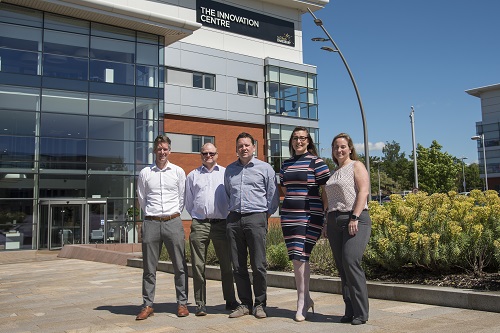 One of the UK’s leading chemical and biochemical engineering design firms preparing to celebrate the third anniversary of its second office in the North West.

BPE opened an office at Daresbury Innovation Centre in November 2016 to complement its existing headquarters in Hampshire. The North West office has since gone from strength to strength, growing so quickly that it has had to move to larger premises within The Innovation Centre.

Highlights since the office’s inception include the running of a successful seminar to review some of BPE’s recent whitepapers, partnering with local companies including Boulting Group and Britest, and the completion of several major projects.

The team has grown and developed over the years, with the recruitment of a process engineering manager and principal process engineer in 2019. Andy Stevenson, who previously worked for BPE as a senior consultant in Daresbury, has recently become a full-time board member as Technology and Consultancy Director. Jon McGeehan, who was instrumental in the setting up of the Daresbury office has now become Business Development Manager and a graduate process engineer has also joined the growing team.

Noel Quigley, managing director of BPE, said: “We have been thrilled with the way our North West office has been received. The base forms an important part of our ambitious long-term growth plans and it’s quite clear that it has contributed significantly to that with its many successes over the last three years. We look forward to further growth in coming years and supporting local manufacturers and researchers.”

BPE has been helping manufacturers make their processes safer and more efficient since 1997. It offers a full range of process engineering services, including process modelling, process safety, project management and process development/scale-up support. Specialising in the chemical and pharmaceutical sectors, BPE counts some of the UK’s biggest manufacturers among its clients, including AstraZeneca and Pfizer.

To find out more visit www.bpe-ds.com