The curse of the contaminating cell line 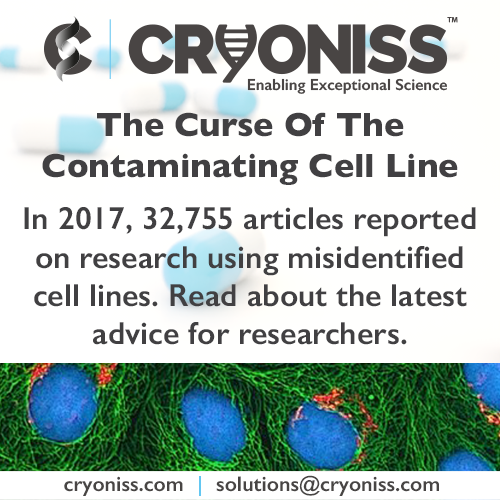 Henrietta Lacks was a historic figure in the field of cell biology.  Her unfortunate death in 1951, lead to the isolation of the first immortalised cell line, HeLa. This cell line has since been used by researchers the world over, and paved the way for using cell lines as models for disease.  The agressiveness of this cell line, coupled with poor aseptic technique, lead to HeLa also becoming the first cell line to contaminate and outgrow other cultures.  Cell line contamination continues to be a significant problem for the bioscience community, with Horbach et al estimating in 2017, that 32,755 articles reported on research with misidentified cells, which in turn were then cited by an estimated half a million other papers.

In 2013, Christopher Korch, from the University of Colorado and member of the International Cell Line Authentication Committee, undertook a datamining exercise to understand the impact of misidentified cell lines.  Korch focussed on two case studies; HEp-2 cell line that was isolated in 1955 from a squamous cell laryngeal cancer, and INT 407, cultured in 1957 isolated from the jejunum and ileum of a 2-month old embryo.  In 1967, Stanley Garner confirmed that both of these lines had been contaminated and displaced by HeLa cells.  Using the cell lines various synonyms and extensively datamining the scientific literature, Korch found that HEp-2 had been referenced in more than 5,700 published articles as a laryngeal cancer.  INT 407 had been used as a normal intestine line in more than 1,300 articles.  Korch estimated that $3.5 billion in total had been spent on research following these two misidentified cell lines alone.

This is clearly a widespread problem, with several cultural challenges ahead that we, as a bioscience community need to address to rectify the situation.  Leading the charge is the International Cell Line Authentication Committee (ICLAC).  This is a global organisation of 20 volunteer scientists, who are dedicated to increasing the awareness of misidentified cell lines.  Chaired by Australian cell biologist Amanda Capes-Davis, ICLAC curates a free, online database of misidentified cell lines, which now number 486.

In 2019, Capes-Davis et al. recommended the following four practical steps that can be taken to make cell-based research more reliable and reproducible:

Cell lines should be tested for contamination.

In 2011, ASN-0002: Authentication of Human Cell Lines: Standardization of STR Profiling was published, providing the scientific community with clear guidance on how to authenticate human cell lines.  Short Tandem Repeat (STR) DNA profiling is now accepted globally.  It is inexpensive and easily interpretable, allowing the identification at the individual donor level, providing assurances there are no cross contaminating cell lines present, whilst enabling the monitoring of lines for genetic drift, or the evolution of clonal populations.  Single nucleotide polymorphisms (SNP) analysis and Next Generation Sequencing are increasingly being used by organisations to monitor cell line contaminations and are valid alternatives.

Mouse cell lines have been widely used for genetic and basic research and together with the transgenic advancements in the field of gene editing, the need for murine cell line authentication is ever increasing.  For this reason,  National Institute of Standards and Technology, in conjunction with ATCC, launched the Mouse Cell Line Consortium in 2016, whose aim was to develop a consensus standard for mouse cell line authentication using STR profiling, and create a public database of STR profiles for mouse cell lines, which is now widely accessible.

With over 200 service providers globally offering cell line authentication services, and many STR profiling off-the-shelf kits available, there are few blockers now for researchers not to authenticate their cellular reagents.

Capes-Davies and the team have suggested that each cell line should be awarded a unique Research Resource Identifier (RRID).  This could be generated via a collaboration between Cellosaurus database (Bairoch, 2018) and the Resource Identification Initiative.  A RRID would enable cell lines, and their associated data, to be flagged for searches and analysis, and referenced in journals.

Reporting of cell line information should be more transparent.

With a new science evolving to investigate a potential reproducibility crisis in science, it is more important than ever for scientists to clearly report well validated methods, clarifying the validation steps they’ve undertaken on their reagents, including ensuring the authenticity of their cell lines and the exact culture conditions tested.  ICLAC has developed a checklist to assist with cell line reporting for manuscripts or grant applications, which is available on the committee’s website.

Organisations should develop policy guidelines for cell line use and handling.

Journals and funding agencies have an important part to play in policing the quality of data published in the scientific community, there is an opportunity for research organisations to take ownership themselves.  ICLAC has published a draft policy on their website for use as a starting point, which can be adapted to suit any company, department or laboratory.

By employing good aseptic technique, and good cell banking practices, cell line contamination, genetic drift and clonal selection can be managed, and the diligent bench scientist can be rest assured by the quality of the data they produce.

Or email us at solutions@cryoniss.com